Preserving the Truth: The Church without a Name and Its Founder, William Irvine

Synopsis of Preserving the Truth

In the 1800s, various men attempted to restore the primitive New Testament church to its first century model. One such restorationist was Scotsman William Irvine, a young charismatic preacher assisted by his right-hand man, Edward Cooney. He experimented with reviving the New Testament methods of holding church meetings in homes and ministers who preached in pairs (“two by two”). His revolutionary nascent movement caught on rapidly and created no small stir in the UK.

Irvine, age 30, was converted in 1893 through Rev. John McNeill, a traveling evangelist affiliated with Dwight L. Moody. Soon after, he left his job as a colliery manager, attended Glasgow Bible Institute, and in 1895 he became a preacher with the Faith Mission for about five years.

Around 1897, Irvine’s passionate, unusual method of preaching influenced many to join his itinerant ministry styled after Matthew Ten, preaching in pairs without prearranged funding. However, the chief motive power was latent until June 1901, when Irishman Edward Cooney, age 34, a Christian lay preacher became a preacher in the new sect. 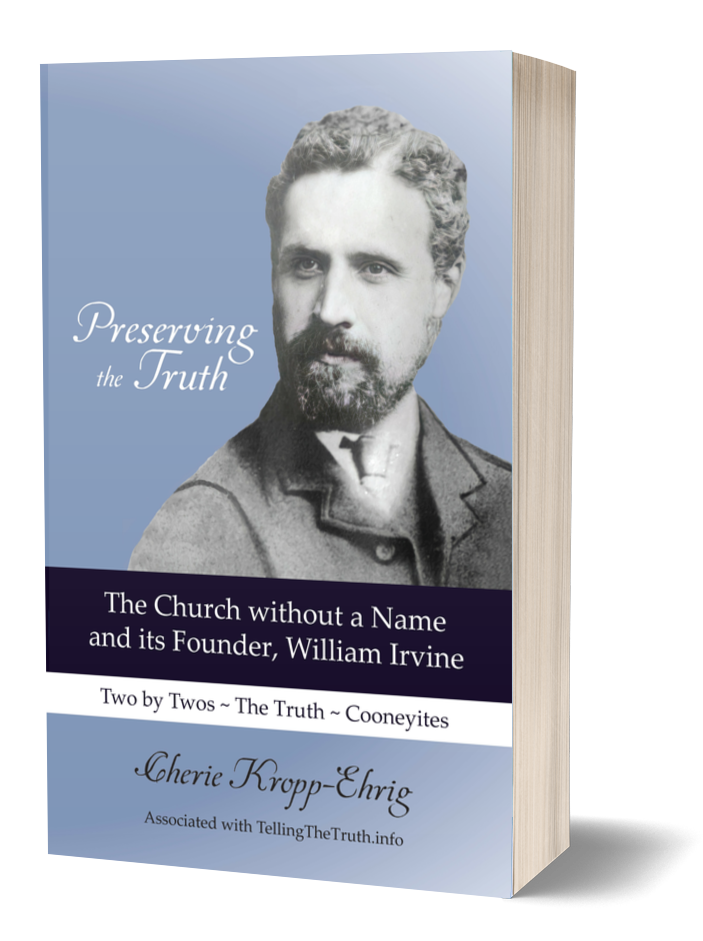 By 1904, the press had dubbed Cooney the “Hot Gospeller of his time,” and he was soon recognized as the second-in-command. While the new sect took no official name, it was commonly referred to as Cooneyites or Cooneyism, an eponym derived from Edward’s surname. The moniker Cooneyites continues to be used today in various publications.

Around 1902, Irvine’s converts withdrew from their respective churches, leaving considerable disruption and anguish in their wake. Members began worshipping only in private homes, denying their original born-again experiences and were re-baptized by full immersion.

In 1904, newspapers reported thousands attending a four-week convention held on a member’s farm in Ballinamallard, N. Ireland. Since then, private annual, regional Christian Conventions have become an integral part of this worldwide fellowship; attendance is expected of all members.

Irvine was viewed as a prophet, a man God raised up to restore the methods of the primitive New Testament church. By 1907, Irvine became convinced that his preachers were God’s only true preachers, and that salvation was onlyavailable through them. A celibate ministry evolved, not without issues. They became exclusive, works-based, denied the trinity and salvation by grace through faith.

Irvine’s senior staff leaders rebelled against him (in 1914) and Cooney (in 1928) and excommunicated them. Their names and roles were expunged, and the church split into three sects. Afterwards, to the question “Who started this church?” they claimed that Jesus was their only founder and that their history was not traceable. Consequently, most current members are unaware of the doctored history and banished founder.

After spending 40 years in this church, Cherie Kropp-Ehrig began investigating its history, a difficult task since the church deliberately publishes no records. This quest took her to the UK in 2004 and 2014 where she discovered its deeply buried roots in Ireland. She unearthed many historical documents that make their appearance for the first time in this book. These include letters, testimonials, accounts, journals, newspaper articles, court cases, photographs, family trees, etc.

Although this church purposely takes no name and has a large global following, few have heard of it. Their most common public nickname is “Two by Twos” (2x2s). Membership estimates range from 150,000 to 4 million worldwide (Wikipedia).

Despite the scarcity of written material and academic research, the author has successfully compiled the only book in print that explores the fascinating details surrounding this unusual, ahistorical church from its beginning to the present.